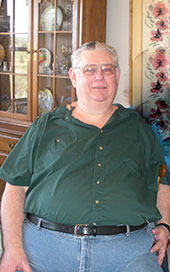 “It’s only been 10 months, since the surgery, but I feel so much more alive!”

James Yeamans was a rather large guy, hitting 6 ft. by the 6th grade and earning the nickname “Big James.” He would eat up to 5 meals a day in large portions and never gain any weight. It wasn’t until his back surgery in 1981, at age 34, that his metabolism started to change and a series of health issues began to arise. Upon retiring and signing up for Medicare, there was nothing holding James back from positively changing the rest of his life through bariatric surgery, before his health issues spiraled out of control.

James unwent Roux-en-Y Laparoscopic bariatric surgery and says, “The surgery pays for itself, in the health benefits.”

James lived a life based off of two things, work and food. He grew up working in the seafood business doing shift work on nights and weekends. After a 20 hour work day, there was no time for sports or free activities, the only extra time was reserved for eating. With no standard meal time, James ate whatever was available, which was typically whatever they had caught that day and fried. He did eat vegetables as well but the consumption of those was limited in comparison to the preferred method of frying foods or cooking with bacon grease.

Hard physical work can mess up your back a lot and that is exactly what happened to James Yeamans. He blew out a disc twice, the second time resulting from a bad fall off the side of a cooling tower, messing up the surgery from his first incident. This is when he started gaining a lot of weight. His weight escalated to a high of 441 lbs. and it was physically exhausting just to get ready for work. No longer able to take the stairs anymore, he was limited to elevators. “I was doing well when I made it to work and came home to bed,” said James

Along with his weight gain, other health issues began to arise. He was diagnosed with diabetes and hypertension and put on 5 different medications as a result. The Victosa injections James was taking, as one of the medications to control his diabetes, was becoming less and less effective, so his primary care physician started pushing bariatric surgery as an option before putting him on insulin. James tried to lose the weight on his own, first, and was able to lose 40 lbs., but he soon hit a plateau. “I was pushing, pushing, pushing, but I couldn’t do it all by myself. I know I needed help,” said James.

James began looking online for bariatric surgeons located closer to his home in south Austin, in the hopes of avoiding lengthy commutes & downtown traffic. He soon stumbled upon Texas Bariatric Specialists south Austin location and liked what he read. “Dr. Patel’s website is geared towards patients and I thought, ‘That’s it. That’s where it’s going to be,’” James stated. After attending the seminar and meeting with Dr. Patel, James was even more certain that he had found his surgeon. “Dr. Patel didn’t judge me at all. He said, ‘You need help so let’s do it!’” said James. And, after speaking with Dr. Patel’s physician assistant James Houston, Yeamans’s mind was set on the Gastric Bypass procedure. “James Houston & Dr. Patel have been here long enough. I didn’t question them.”

Ten months after the surgery, James lost 161 lbs., his blood sugar is below 100 in the normal range, his hypertension is gone, & he stopped using all five of his medications. “The surgery pays for itself in the health benefits,” James said, “I will probably live another 20-30 more years & I didn’t know whether I would’ve lived 4 or 5 more without it.” He went from carrying two canes with him everywhere, worrying about if there was going to be a place to sit down, to spending up to 6 days a week at the gym with a personal trainer and running a mile per day! “It’s only been 10 months, since the surgery, but I feel so much more alive,” James exclaimed. He still has to battle urges to eat out of boredom, but he does this by surrounding himself with encouraging, supportive people and being conscious about how much he consumes. Most of the time he eats 2 small meals and up to 5 half shakes, to keep himself satisfied throughout the day. “I have had no negative remarks, but I have had several encouragements,” James proclaims, “All I have to say is, when I broke 300 lbs. it was one of the happiest days of my life & with a gym so close to my house that offers free classes to my age group, there’s no excuse to fall off track!”