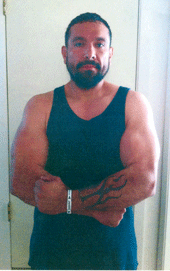 I’ve recommended Bariatric Surgery to so many people

“Everything from the beginning of the Bariatric Surgery to the end with Dr. Patel and his office was amazing.”

Benito Ramon never slept well; he figured that waking up numerous times throughout the night and feeling tired the next day was normal. At 420 pounds, his wife also had a hard time convincing him to get off the couch or agree to have their friends over, she was telling him he was depressed. Benito didn’t feel depression was his problem, it was the ongoing battle with his weight he’d fought ever since he was a kid.

Even though he was always overweight as a kid, it wasn’t until his 20’s and 30’s that Benito gained a lot of weight. In high school, he was active but still bigger because he wasn’t healthy, he had bad eating habits. “When I was bored, I ate. When I was sad, I ate. When I was happy, I ate; I was always eating,” he recalled from life before bariatric surgery. As he continued gaining weight, he started exercising in hopes of slimming down, but it only hurt him. Working out was putting too much pressure on his joints causing terrible pain in his knees, back and ankles. “It would take me two to three days to recover from working out and be able to walk again,” Benito said. “I could never control it, I could never get a handle on my weight.”

As Benito gained weight, one of his cousins was losing weight. His cousin had a kidney problem and her doctors told her the only way to have a successful, major kidney surgery was to lose weight. She decided on bariatric surgery and had  gastric bypass surgery and she quickly lost 120 to 130 pounds and was able to safely have her kidney surgery. He knew his cousin really liked her Bariatric Surgeon, so Benito decided to look into it and she referred him to her surgeon, Dr. Patel. “I trusted her and she had a good experience with Dr. Patel,” he said.

“Dr. Patel and I were on the same page from the beginning,” Benito said. “I knew I needed the most drastic bariatric surgery and Dr. Patel left the final decision to me.” He decided on the same bariatric surgery as his cousin, the gastric bypass. Benito began to complete the clinical tests Dr. Patel prescribed and he found out why he never slept well, he had sleep apnea. “My friends told me that I’d fall asleep at work and stop breathing at times for 20 seconds!” He got on a CPAP machine to help with better sleeping and was told after surgery and weight-loss, a majority of patients’ sleep apnea decreases and they can sleep well even without the machine. “Everything from the beginning of the bariatric surgery to the end with Dr. Patel and his office was amazing,” he recalled how Dr. Patel’s staff told him what to expect without sugarcoating anything and he had no surprises throughout the entire process.

After his gastric bypass, Benito was able to begin light work outs about a month and a half afterward and already was beginning to feel better. Three months after surgery, he began feeling drowsy and sluggish again. After speaking with Dr. Patel’s office, he realized it was because he wasn’t taking his vitamins and protein. “Once I lined that up – everything went smoothly! I started losing weight really quickly, about 15 pounds a week.” A year after, he was able to work out regularly and lift weights without joint pain.

The best part about losing so much weight was that he is able to help coach his son’s sports more effectively. “It was frustrating before when I was overweight because I couldn’t always show them proper techniques,” he said about the obstacles he faced coaching before his bariatric procedure. Today, he looks forward to help coach his children’s sports now and in the future. “I used to just want to sit and watch tv, now I can’t stay away from being active.” On top of helping coaching, Benito plays on two softball teams, a co-ed and all males team and he enjoys every minute of going out and being as active as possible.

Now, he recommends Dr. Patel and Bariatric Surgery to anyone who wants to lose weight and are ready to make a lifestyle change for the best. After just 4 months, no one in his small town even recognized him anymore.  A lot of people in his town ask him who his surgeon was and he’s referred many people to Dr. Patel. “That’s the best advertising,” he says, “actually seeing the changes.’”