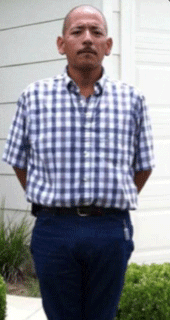 “I wanted to watch my little girl grow up.”

Gastric Bypass Surgery Austin Success Story David Tenorio was never as concerned about his weight as he was about having a good time. He and his group of friends spent their free-time having a few drinks and enjoying the Austin night life. “I was drinking both alcohol and soft drinks. During the day it was soft drinks, and alcohol at night,” David said.

“I’ve always been a big person.”

David was not very active in high school, he enjoyed hanging out with his friends and didn’t realize he was as big as he was. “I’d always been a big person,” David recalled. He always ate unhealthy, ate at bad times of the day, and frequently overindulged. Figuring he could lose the weight easily at any time, David didn’t worry about his eating habits and enjoyed the good life. Unfortunately, after high school, losing weight never happened. “I was still too busy eating and drinking,” he said.

After he got his commercial driver’s license for his job, David realized he had a serious health problem, high blood pressure.  Even worse, he was unable to obtain a medical card in order to drive a commercial vehicle because of this health issue on top of his large weight. Trying to lose weight by exercising, but running into hurdles, he turned to his wife who’d lost a large amount of weight with a different tactic, bariatric surgery.

Prior to David and his wife getting married, his wife had completed bariatric surgery due to her diabetes and, of course, to lose weight. Even though she mentioned for him to look into getting surgery as well, he wasn’t ready to make the life change of giving up unhealthy food and drinks. Then he had his daughter.

“My daughter made me change,” David said.  Having no energy to play with her was upsetting to him and even when he tried to go out and play ball, being a big guy, he couldn’t physically stand outside too long, especially in the sun. He also had to worry about potential health issues on top of his high blood pressure. “I didn’t want to have a heart attack,” he recalled about not wanting to not be there for his daughter. “I wanted to watch my little girl grow up,” David said. That is when he decided to attend one of Dr. Patel’s weight-loss seminars.

“My wife told me to look into Dr. Patel because he did her surgery,” he said. After attending the seminar, David knew that bariatric surgery was for him. Upon meeting Dr. Patel, they decided the Gastric Bypass procedure was the right route. “I liked Dr. Patel, he still calls me the ‘big guy,’” David said, “even after surgery, Dr. Patel says, ‘hey, how’s it going big guy?’” He also found a lot of support from Texas Bariatric Specialists’ dietician, Debbie. “Without Debbie’s help, I may not have lost all the weight.”

After surgery, David lost weight very fast for the first few months, and even though his friends and family were constantly asking him if he was sick or if something was wrong, he told them he was fine. David had decided that the only person who would know about him undergoing bariatric surgery would be his wife. By the 6th month, he’d lost so much weight that his friends were beginning to worry, and they were also curious as to why he had suddenly given up unhealthy food and drinks, alcohol included. “Honestly, I had no appetite after my surgery. I didn’t want alcohol or bad foods anymore,” he said.  “Debbie gave me a lot of alternative food choices other than protein shakes,” which also helped him stay away from bad foods.

Additionally, David’s rapid weight-loss gave him surplus energy to run around and play with his daughter. He is even able to drive commercial vehicles without stopping for fast-food. Instead, he drinks a gallon of water throughout his trips, eats crackers with peanut butter, and continues with plenty of protein. After a while, David did finally tell his family and friends he had a gastric bypass and they reacted well, telling him how great he looked and how surprised they were that he could completely stop with the partying lifestyle. A few friends even asked David if they would be covered for bariatric surgery. “I tell them all to call the office and go to a seminar and that TBS will give them options to get it done.” Today, he still enjoys being surrounded by his friends, only now he enjoys drinking water over alcohol and protein over junk food.