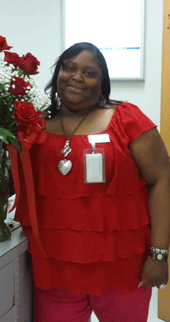 “My heart and gut told me, these are the people that are going to help you.”

Gastric Sleeve Surgery San Antonio Success Story Denita said “I used to sound like a bear tearing down the walls, but now I sleep like a baby!”

Denita Jones was what one would consider a “junk-food kid,” filling her pockets with candies and her stomach with sodas, and she wasn’t concerned with changing these habits for anyone. It wasn’t until being diagnosed with diabetes and struggling with sleep apnea as an adult, that the thought of change crossed her mind. With the help of a close friend, Denita made the decision of becoming a committed bariatric patient, the leap of help that changed her life.

Denita put on weight slowly throughout her elementary years. It wasn’t until the 5th grade that her parents started to notice she was beginning to look a little overweight, but their family physician said she was still growing so no one worried about the extra pounds quite yet. Despite their positive outlook, by time Denita was in middle school, she had become severely overweight. Neither her nor her family ate healthy; dinners consisted mostly of fatty foods, like pork chops. And, Denita, being a “junk food” child, loved chips, cake, and candy. She would venture to a store around the corner of her house and buy $20 worth of nickel & dime candies and eat the entire stock in only two days! She would even sneak bags of chips into her room to munch on in-between her sugar cravings.  Kids at school began calling her names like “Miss Piggy,” so Denita spent most of her time playing inside her own room instead. One time, at a family BBQ, people were wondering who the pretty young girl was. No one even knew her Mom had a daughter because she was inside all of the time!

As Denita got older, a neighborhood friend, named Pam, took her under her wing. Pam had lost a child in her own family that was overweight to a heart attack at the young age of 13. She taught Denita how to exercise at the gym and took her for walks every single day for about two years before Denita started to hide from her. Her parents and older brother would tell Pam that she’s in her room and she’d yell, ‘”No she’s not!” Eventually, Denita stopped caring and fell into old habits.

As an adult, Denita would drink eight 20 oz. sodas a day and eat a lot of snicker bars. Denita was also put on a CPAP machine at night due to obstructive sleep apnea that had developed as a result of the obesity. People started telling her that she’s going to become diabetic, but it wasn’t until attending a work-related seminar where her feet swelled up leaving her barely able to walk that she began to take all the talk seriously. Denita took herself to the hospital and was told she had gout and a blood sugar level of 340! She was put on metformin, but ended up gaining even more weight, and eventually her high blood sugar turned into full-pledged diabetes.

Upon speaking with one of her closest friends who is also a successful patient of ours, Senetta, about her struggle, it was suggested to Denita that she attend a surgical weight-loss seminar at Texas Bariatric Specialists. Denita responded with, “I don’t do things like that,” and even tried to hide from her on their first scheduled visit together.  Senetta didn’t give up on her though and dedicated time to proving to her that this decision was the best one, for her health’s sake.  Eventually, all of her persistence paid off and Denita showed up for a seminar.

After attending the seminar and speaking with Dr. Patel’s PA, James Houston, Denita was convinced that bariatric surgery was the right move for her. “I decided to get my gastric sleeve procedure done by Dr. Patel because of the success rate,” Denita explains, “but the fact that the whole staff was wonderful, including Dr. Patel and James, sealed the deal! My heart and gut told me, these are the people that are going to help you.”

Soon after Denita’s gastric sleeve procedure, she dropped from a size 26 to a size 10. “I’m in denial that I can fit into those pants,” Denita exclaimed, “I ran out of the dressing room, for the first time, with no shirt on and no shame screaming, ‘I can fit, I can fit, I can fit!’” A lot of people Denita had known for years pass her by on the street without recognizing her.  One comment she received was that she lost a whole person, to which Denita replied, “Yeah, I lost her and I’m not going to get her back or find her!”

Denita is careful to continue progress by making sure to eat plenty of protein and vegetables.  Her taste buds have changed a lot from her sweet-tooth days and she explains how phase 3 of the post-operative diet phases was her favorite because she could eat salads! She also makes sure to get some exercise in by walking 4 miles a day, 2 in the morning and 2 in the evening. As for her diabetes, Denita used to pass out at work and paramedics knew her by name; but since her procedure, she hasn’t had to take any medication again! Her sleep apnea has also disappeared. “I used to sound like a bear tearing down the walls, but now I sleep like a baby,” she exclaimed.

Denita would like to thank all of her friends and family, including the new family she’s made at Texas Bariatric Specialists. “Thank you everyone for the support. Thank you James for all of your honesty. And, thank you Senetta. If it wasn’t for Senetta, I wouldn’t even be here,” Denita said, “I am not ashamed of anything and will tell everyone my whole story. People tell me there are too many risks with surgery, but I say, ‘No, it’s a risk just walking across the street!’”