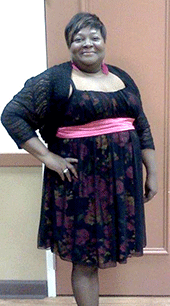 “I can have a good retirement without worrying about the possibility of being in a wheelchair.”

“It’s all about your attitude; you have to have a positive mindset to be successful.”

Jonnie Wilson was always overweight as a child, hitting 120 lbs. by age 10. Obesity ran in her family and it didn’t help that her Dad was a gourmet chef in the military, teaching her and her siblings to eat everything on their plate because too many people are starving in the world. Upon entering Junior High, Jonnie had developed asthma, due to the rapid weight gain, preventing her from participating in P.E. class. Instead, she would play checkers as the other children made fun of her lack of participation.

After graduating High School, Jonnie’s struggle became more complicated than weight gain alone. She was a single mother raising 3 children, working 3 jobs, & completing her undergrad at Texas State University. Her main concern was being able to provide for her children and put food on the table. Unfortunately, due to her tight schedule, nutrition was put aside in exchange for cheap and convenient options. “There was never any conscious effort to stop and think about what we were eating,” Jonnie added.

Eventually, trying to balance this kind of workload, in addition to the lack of nutrition, took its toll on her life. Every time Jonnie went to see her Doctor, she was put on a new medication: cholesterol medicine, 4 types of blood pressure pills, and allergy shots for her asthma. While she was in Missouri completing her graduate degree, she even developed diabetes and sleep apnea. Jonnie would wake up every 30 minutes in the middle of the night gasping and struggling for breathe, resulting in her need for use of a CPAP machine.  She was also constantly in and out of the hospital and her doctor kept increasing her amount of insulin each time she saw him. And, due to the high dosage of insulin that she was now on, Jonnie developed edema & vision problems. “I was so tired of having something else to worry about each time, not to mention worried, “exclaimed Jonnie.

Jonnie knew she needed to get help and her primary doctor was very supportive and thrilled about her decision to receive bariatric surgery, but Jonnie’s priorities were suddenly elsewhere. One of Jonnie’s daughters was pre-diabetic due to obesity; and in her common fashion of putting her kids first, Jonnie helped her daughter through the bariatric process before herself. Together, they researched their options online and stumbled across the website of Texas Bariatric Specialists, where they signed up for and attended an initial seminar with Dr. Patel’s physician assistant, James Houston. “James was very enthusiastic and explained the process thoroughly, “Jonnie said, “which prompted us to continue with Dr. Patel as our surgeon.”

After seeing her own daughter’s life dramatically change post-surgery, Jonnie was further encouraged to proceed with her own bariatric process. “Dr. Patel and his staff took such good care of my daughter and I already knew the whole process, so I was ready to focus on me for a change,” Jonnie stated. From that point, due to her diabetic complications, it was decided that Gastric Bypass would be the best route for her to lose the amount of weight necessary to benefit her health long-term. “You can always complain and sit on the situation, but I decided to take action,” she stated.

Immediately, a few days after the surgery, Jonnie was able to sleep like a baby. “I finally have mental clarity, no more fog from lack of sleep,” she said. Along with the disappearance of her sleep apnea, Jonnie’s asthma disappeared and she no longer needs to take insulin for her diabetes. “For the first time in my life, I felt healthy,” exclaimed Jonnie, “I even mowed my lawn without any trouble breathing!”

Jonnie puts in long hours working at the University with students, so would spend her weekends sleeping and watching TV. Now, after the surgery, she has so much energy that she will sometimes workout on her lunch break during the week, as well as go to the gym after work with friends. “I now have extra energy to pursue my dreams of becoming a counselor for women struggling with abuse,” declared Jonnie. Along with the increase in energy, Jonnie has become more conscious of her eating habits. She no longer eats fried foods or candy, she makes sure to consume her daily recommended protein intake, and drink plenty of water. “When I was stressed I used to want to eat just because it was comforting,” Jonnie admits, “I would sneak in Snickers bars, despite my diabetes. Now, I don’t feel well if I don’t eat clean.”

Jonnie’s confidence has increased, as she attends more events where she can be seen instead of trying to hide. “A lot of people see my lifestyle change and ask about the surgery,” said Jonnie, “I’ve become an unintentional spokesperson for Dr. Patel. I tell them ‘It’s all about your attitude; you have to have a positive mindset and be willing to go through the process. If you follow the office instructions, you will be successful.’” Her friends further encourage her by giving her clothes as she sheds the pounds quicker than she can keep up. Jonnie’s primary doctor tells her that she’s added 15 years to her life as a result of her Gastric Bypass. “Now, I can have a good retirement without worrying about the possibility of being in a wheelchair,” Jonnie concludes, “Who knows if I would’ve even made it to retirement before!”