John spent many years making a great sacrifice for our country and protecting our freedom while he was in the Navy. While in the Navy he had a very strict daily workout regimen that kept him in shape and kept him from putting on weight no matter what he ate.  When John left the Navy he weighed about 230lbs and by the time he had surgery in 2015 he weighed in at 338lbs.  John was no stranger to the other options out there to assist in his weight loss, his mom had a Gastric Bypass and his sister had a lap band, so after thinking it over he finally decided to look into it.  John began his journey with Texas Bariatric Specialists in June of 2015 and on September 28, 2015 and in just over a year John has lost over 140 lbs. 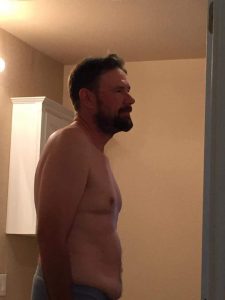