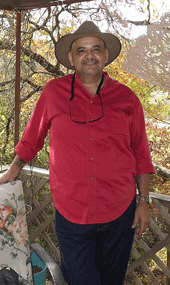 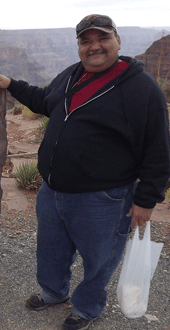 “I ate anything that wouldn’t eat me first!””

Greg Martinez friends were concerned; they would shake their heads and say “Man, you’re getting big!” Greg would respond with a cheerful “I’ll eat anything that doesn’t eat me first!”, using laughter as a defense mechanism he could hide behind. Greg knew he needed to lose weight – and had done so once before – but a car accident had left him unable to work out. He knew he wasn’t eating healthily and was unhappy with his appearance. Greg is not a vain man, but when saw pictures of himself before he gained weight, and then looked in the mirror, he didn’t like what he saw. Always slim as a kid and used to working out and lifting weights regularly, Greg began to wonder if he would ever be able to be healthy again.

But his health issues were what finally drove Greg to look for help. To his back problems caused by the accident, he had now added high blood pressure, high cholesterol and the beginnings of diabetes. His weight and health problems further exasperated his PTSD and bipolar symptoms, and he knew he was adding too much alcohol to his painkillers. Greg was in the emergency room four times in one year, and then finally realized he needed help.

Searching for possible solutions on the Internet, Greg found Dr. Patel and Texas Bariatric Specialists (TBS). He was impressed with the results and track record achieved by Dr. Patel and identified with the patients’ success stories. He reserved a spot for the next free seminar near his home in Kerrville, TX. Though he had originally intended to visit more than one doctor, he found the answers for his questions at TBS and says, “I didn’t need to go anywhere else!”

Today, nine months after his Gastric Bypass performed by Dr. Patel, Greg now tells us he feels “excellent”! He has substantially changed his eating habits and says comparing what he used to eat to what he eats now is like night and day. He eats healthy food with high protein, including protein shakes, fish and salads, and has smaller portions of other foods such as red meat. Greg relies on James Houston in the Austin TBS Support Group for advice on foods to eat in order to grow lean muscle. And he makes sure that he takes vitamins both morning and night.

Greg’s cholesterol is normal now and his diabetes symptoms are completely gone! His PTSD is much more controllable, as his “lows” are not as low or as frequent. He has purchased a weight set and looks forward to a regular weightlifting routine.

And, as his photos prove, Greg looks great; “I’ve lost a whole person!” he says!