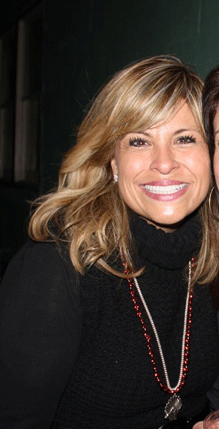 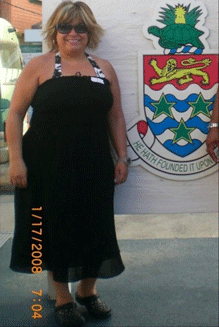 “I Treat Myself Every Day!”

Lap Band Surgery San Antonio Success Story Norma Gonzales’ turning point occurred in the car, stemming from a conservation between her son and his friend, just kindergarteners. Speaking about another child, her son’s friend said, “Have you seen his mom? She is REALLY FAT!”  Read more below…

Norma Gonzales, San Antonio
“I wanted my kids to be proud of me!”

Norma Gonzales’ turning point occurred in the car, stemming from a conservation between her son and his friend, just kindergarteners.  Speaking about another child, her son’s friend said, “Have you seen his mom? She is REALLY FAT!”

That did it for Norma.  Even though the comment wasn’t about her, it hit her like a ton of bricks.  What if someone were to say that to her children about her?  She didn’t want them to be embarrassed by her – she wanted her children to be proud of her!

Never rail-thin, Norma’s weight had been 10-15 pounds over what her small, 4 ft. 11 in. frame was designed to carry for several years.  Beginning in her teens, she had exercised – taking lots of cardio classes, and been on numerous diets. She was able to lose a little bit of weight, but it would come back as soon as she ate “normally”. Diagnosed with hypothyroidism, she understood she needed to eat less than most people, but she could never seem to reduce her intake enough to make much of a difference, no matter how many salads she ate.

Overall though, life was good for several years, as Norma added a wonderful husband and son to her life.  But severe postpartum depression after her second child shook Norma off her good habits of the past.  She sought comfort  from the depression and guilt in food, staying home and eating after work rather than exercising, and the weight began to pile on. Her weight approached 200 pounds, too much for her 4ft, 11in frame to carry comfortably. As a professional hairdresser, she was on her feet all day and her increasing weight began to take a toll on her body; her back almost always hurt and she developed bone spurs.  Her legs and ankles ached and she couldn’t run or play with her children.  Depression and stress mounted, her hair began to fall out and she was warned by her doctor that she was borderline diabetic. But she continued to eat and her life was spiraling down – and out of control!

The boys’ conversation in the car did it – Norma wanted her children to be proud of her and to learn from her, and wondered what kind of example she was setting for them if she couldn’t control herself.  She also asked herself how she could possibly continue working and caring for her family for another 20 years if she couldn’t do it now, in her 30’s?

Norma did extensive research online, looking at various weight loss alternatives. Her search led her to Dr. Nilesh Patel of Texas Bariatric Specialists (TBS) and, impressed by his extensive experience and stature in the bariatric surgery community, attended a TBS seminar, and then made an appointment to see him.  Together, they decided on Lap Band surgery and Norma went through the required pre-operative tests to ensure she was healthy enough for surgery. Though her insurance did not cover the costs, Norma persevered and obtained financing with the help of the TBS staff.

Though the first few weeks after surgery are not easy, and diet is restricted to liquids such as protein shakes, Norma felt better and more energized almost immediately. She learned to eat slowly, in smaller portions. The weight began to come off and her legs and ankles felt better quickly.  She began adding exercise back in to her life, learning that weight training works best for her, as it boosts her metabolism and helps her burn calories more efficiently. Norma’s husband, whose parents had been diabetics, did not want to pass the ailment on to their children and he changed his diet along with hers.

Now, almost five years later, Norma is not only healthy – she’s happy!  Her former depression has disappeared with her excess weight.  She feels in control of herself and her life, having fun with her family, working out 2-4 times per week and eating healthily.  Her marriage is even stronger, because her self-esteem is strong. She tells us she eats what she wants, just not every time she eats, and in smaller portions, and that the whole family is thriving on protein and veggies!  Norma still goes in to see Dr. Patel a few times per year, as she finds that being accountable to someone outside her family works for her.

The key to Norma’s continued success lies in her statement, “I treat myself every day!”.  On weekdays, she and her kids have a routine; as she drives them to school, they stop at Starbuck’s and they each get a cookie.  Norma slowly savors that cookie, enjoying every bite!  Keeping her daily intake of food in control, she counts the cookie, balancing it with the rest of her food for the day.  Even on the occasional day she goes off her plan, she forgives herself and just gets right back on the next day.  She’s healthy, happy and in control of her life!