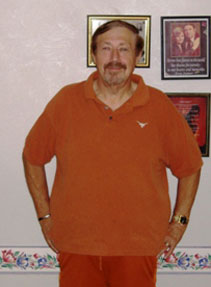 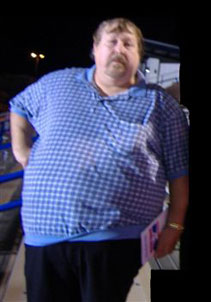 Gastric Bypass Surgery Austin Success Story Robert was an active and healthy athlete growing up. He played sports all year around in high school, so had a big appetite, but that appetite was balanced by his very active life.  Read more below…

Robert Hunsucker, Buda
“I was a walking time bomb!!”

Robert was an active and healthy athlete growing up. He played sports all year around in high school, so had a big appetite, but that appetite was balanced by his very active life. He followed his school career with a successful career as a life insurance adjustor, but the high-stress job offered little time for sports, and Robert’s needed relaxation took the form of sedentary television viewing with easy, but high calorie, high fat snacks. As the snacks became a habit, he craved more of them, and as he got heavier, sports became less of an option. As he matured, Robert’s health began to deteriorate;;“the older I got, the more mortal I was becoming”, he noted. He eventually developed diabetes, high blood pressure, and high blood sugar and became what he knew, as an insurance professional, to be a high insurance risk – “a walking time bomb”, in his own words!

There was no outside pressure on Robert to make a change – he decided on his own that he needed to do something for himself. Robert is part of an extended Central Texas family and one of his sisters had successful weight loss surgery, so he sought her advice. His sister Sharon is a Ph.D., so had done extensive research to find the most experienced and highly qualified bariatric surgeon in Central Texas, and had decided on Dr. Nilesh Patel of Texas Bariatric Specialists to perform her surgery. She recommended he consult Dr. Patel as well, and spoke highly of the compassionate care she received both pre- and post-surgery, including sessions with the doctor, his staff and group support meetings with other patients.

Robert borrowed his sister’s books and research, made the decision to see Dr. Patel, and hasn’t looked back! With Dr. Patel’s guidance, he initially dieted to lose 25 pounds pre-surgery. His surgery was complex, but he received great care from the doctor and his staff. He looked forward to the support group sessions he attended regularly in Austin, sharing tips on activities, recipes and lifestyle with other patients.

Those nights in front of the television are rare for Robert now – he walks with weights seven miles, seven days a week and is justifiably proud of his healthy 225 lbs. He and his wife eat balanced, nutritious meals and he no longer craves the high calorie, high fat foods he used to eat. Robert tells us, “Gastric bypass is your jumpstart -everything else is up to you.”

And the rest of the family? A second sister also had successful gastric bypass surgery and a third sister and two cousins are now preparing for theirs, all with Dr. Patel of Texas Bariatric Specialists. They are planning on happy family reunions for many years to come!