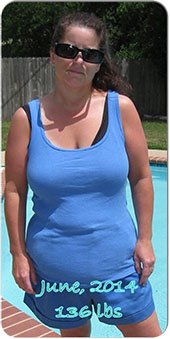 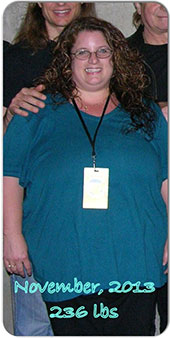 “If I could I would do it all over again!”

“I am now able to swim like I used to when I was a kid! I even wear junior size clothes!”

As a child Judith, Judy, was an active swimmer. At the age of twelve Judy’s swim team moved across the city and she was forced to quit. After her discontinuation with swimming Judy needed to find something to do after school. “I got in the habit of coming home from school and just eating as much as I wanted without any supervision!” Judy learned to ignore her weight problems while she attended the University of Colorado at Boulder. When she finished her schooling Judy moved back to Texas and was diagnosed with High Blood pressure. At first there was no cause for alarm. “I would try losing weight myself with weight watchers, slim-fast, and other fad diets. I never had a problem losing weight I just had a problem maintaining my weight.” In the middle of the night Judy would wake up and be out of breath just from rolling around in bed at night! With no real results Judy began to feel slightly, “depressed”, and knew that she needed a more permanent solution.

At her highest weight Judy was two hundred and thirty-six pounds. She first came into Texas Bariatric Specialists on June 15th 2013. Her first consult was with Dr. Patel’s PA. “Originally I wanted to get the lap-band procedure but James talked me out of it!” After her first meeting with James Judy said she, “liked (him) a lot!” Her insurance did not cover the procedure at the time but with determination she was able to get the procedure that changed her life. The day of the surgery Judy felt great and was discharged from the hospital the next day. After she left the hospital Judy says she felt, “Oddly happy. The hospital staff at Southwest General was great!”

At her current weight Judy is one hundred and eighteen pounds! Her blood pressure has decreased and her energy has increased. She is now able to, “Swim like I used to when I was a kid! Before I could not even swim twenty-five yards!” She is now able to swim four thousand five hundred yards and has competed in the “Lake Travis Relay.” Working out five days a week she has begun making a habit of living healthy. Judy is an active member in our online support group and continues to be an example for patients wanting to have the surgery performed. She will continuously remind patients of the importance of the pre-op diet and Dr. Patel’s instructions. Her commitment to changing her life with weight loss surgery has resulted in her fantastic results. Judy has lost over a hundred pounds and doesn’t intend on stopping until Dr. Patel says so. Her kids hardly recognize her anymore, “Who are you and what have you done with our Mom”, she exclaims. “I am now shopping in the junior section for my clothes!” The only expense Judy did not anticipate was the cost of having to buy an all new wardrobe for herself. She skipped sizes in clothes and would have to return them! Judy continues to distinguish herself as one of the more determined and charismatic patients Dr. Patel has. “If I could do it all over again I would!”