Read the details about Bariatric Surgery San Antonio Salvador Onofres success story. Learn why Salvador said, “this surgery will be the best decision you will ever make in your life.” Salvador did not have your typical morbidity diseases that kept him from losing weight but instead he had severe hip arthritis, high blood pressure, depression and was on a CPAP machine for a good amount of time. He had his knee replaced 4 times and he believed the cause of it was because of how heavy he was. Salvador attempted appetite suppressants but was unsuccessful.

The moment that he knew bariatric surgery was a necessity to get his life back on track was when his wife sent him a picture of him sleeping one morning with his CPAP machine telling him how peaceful he looked while he slept but Salvador knew it was for a different reason. Salvador looked at that photo and couldn’t believe he had allowed himself to get that big and unhealthy.

That was when he began his journey towards bariatric surgery. Salvador did what most people do, he worked hard prior to surgery to get himself ready and surpassed any expectations his doctors had for him by losing 80 pounds prior to his surgery. On November 16 of 2020 Mr. Onofre had his sleeve gastrectomy with Dr. Patel. 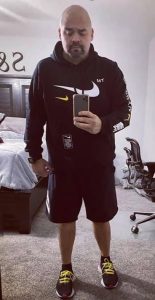 Salvador was his heaviest at 374 prior to his surgery and currently weighs 244 just less then a year after his surgery. His goal weight is to be at 225. Mr. Onofre follows a diet of two shakes a day with a protein meal in between. Protein meal in between includes, turkey, cheese, almonds, a salad and sometimes even honey nut cheerios if he is feeling a little hungrier than usual. Salvador learned that he can still eat many of his favorite foods, but he had to learn to moderate.

I asked Mr. Onofre if he had any words for those seeking bariatric surgery san antonio and he said, “best decision.” Salvador wished he would’ve done it sooner so he could have been able to accomplish more. He is waiting on clearance from his surgeon who did his 4th knee replacement to begin exercising. Once he gets that clearance, Salvador will continue working towards getting himself at his goal weight. Mr. Onofre is the happiest he’s even been, and he no longer uses his CPAP machine.