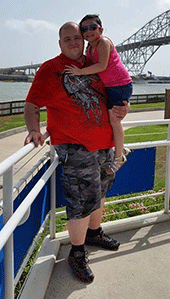 “I do miss eating all my favorite meals as much as I want but I love my new healthy life more!”

“ I am so grateful for all the positive reinforcement from Dr. Patel, my father, girlfriend, and family and friends who have been with me the whole time!”

As a child Thomas never struggled with weight issues. It wasn’t until the passing-away of a close family member that Thomas began putting on unhealthy weight. The tragic loss caused him to begin experiencing depression, ultimately letting his weight-gain get the best of him and become uncontrollable. It continued to get worse as his depression seemed to increase with his weight, ‘The heavier I was the more depressed I became!’  After graduating, Thomas found a job working with the state department.  He was not required to get up and move around much, and once he understood his work Thomas said, ‘The job became laid back.’ Thomas would regularly enjoy his favorite meals. Some of his favorite meals consisted of stuffed crust pizza, chips, Chinese food, and lots of South Texas Mexican meals.  At this point Thomas was taking multiple medications, daily, for his high blood pressure. His excess weight became so bad for his health that he would sometimes pass out at work. Still he continued living his life as it was. He felt like he should try changing his lifestyle so Thomas said, ‘I would try to work out but couldn’t workout or run long enough. I was always out of breath.’ One day Thomas was at the aquarium with his niece and his back and knees began to really hurt. ‘I couldn’t even keep up with her!’ She would be in-front of Thomas and there would be nothing he could do about keeping up. He thought to himself, “I want to be around for my niece, and decided to make a real change.’

Thomas began looking at his local doctors, but did not feel comfortable with any of them. It wasn’t until a couple years later that a friend told him about Dr. Patel out of San Antonio. His friend had his procedure done with Dr. Patel and had great results. When Thomas saw that Dr. Patel would be traveling down to Corpus Christi he was apprehensive about scheduling a seminar. Even though Thomas was nervous he decided to give it a shot and see how Dr. Patel could help him change his life. After Thomas attended Dr. Patel’s seminar he said that, ‘(He) felt very positive afterwards. I felt like Dr. Patel truly cared about me and my results!’ After a few quick clinical tests Thomas was ready for his RNY Gastric Bypass.  The day of surgery Thomas admits to being, ‘a little nervous’ but says that his dad was more nervous than he was! After waking up from the procedure Thomas was ready to start his new life. He felt great and was thankful to the hospital staff for providing excellent patient care, ‘hospital staff was a big help in getting me up and walking around!’ After Thomas left the hospital he felt no complications from the procedure and began his new diet.

Nine months removed from his procedure Thomas has lost an astounding two-hundred and thirty-three pounds! ‘I went from a 6 XL T-shirt to a regular XL and a size fifty-eight waist line to a size forty!’ Thomas weight-loss has been entertaining for the entire clinic staff to watch. ‘When we see somebody who succeeds like Thomas it really makes our job worthwhile!’ says Dr. Patel’s clinic staff. Thomas feels great about the choice to see Dr. Patel and still keeps in contact about his results with members of Dr. Patel’s staff. ‘People still keep in contact with me from the very beginning’, says Thomas, regularly he will meet with Dr. Patel’s PA, James Houston, who is helping Thomas develop workout regimes and build muscle mass! No longer is Thomas having to suffer from the burden of being overweight and dealing with the side effects. He is off all medications and is looking forward to losing as much weight as he can! ‘People do not even recognize me anymore, my father has to take two looks to remember who I am!’ Thomas would like to thank Dr. Patel and James Houston for all the positive feedback they have given. Thomas is now able to live the life he always imagined. He does say, however, that, “If not for the support from my father and girlfriend Jessica Charles I would not be where I am today!” Thomas constantly is expressing his gratitude for the help his girlfriend, father, friends, and family members have been and how important each one of them have been to him in his weight-loss journey. Now, Thomas is able to keep up with his niece and maybe even outrun her!